In the essence of our blog, we asked a few friends and blogs we follow to share with us their top tracks of the year. We are always interested in what makes people musically tick and hear the stories associated with them. At the same time maybe learn a thing or to or maybe catch something we've missed. So a big thank you to you all for taking the time to contribute.
Here we have 'C', from the blog Sun Dried Sparrows, a pot-pourri of music, art and fantastic nostalgic stories! 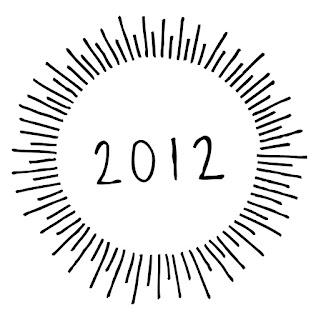 I won’t be sorry to see the back of 2012. It’s been quite a crappy year, with some false starts and forced endings, anxieties and sadness. Perhaps that’s why I’ve fallen for feel-good songs and guilty pleasure moments more than usual. I’ll even confess to getting a kick from… watching Rylan on the X Factor. Not listening to his singing – NO! – but enjoying his androgynous appearance, his candid Essex boy banter and (“d’ya know what?”) seeing him disarm Gary Barlow with his flirting… But please don’t be put off by this admission, I really do have quite cool taste usually ;-)

In spite of that weakness for dubious gratification, I’ve struggled to think of many 2012 releases that really do it for me. My current musical indulgence is something that’s actually far from current: I’ve been on a Suede trip for some months now, and can’t stop listening to their albums which all but passed me by in the ‘90s. I’ll return to this infatuation a little later.

I’ve been trying to keep up-to-date, though! At the start of the year, Lana Del Ray released the album ‘Born To Die’. I don’t know much about her and hadn’t paid much attention to her output but when I heard the song ‘Million Dollar Man’ I was immediately smitten by it. Sultry and cinematic, classy but very slightly trashy at the same time, it came as a surprise to these ears and for those reasons it makes the grade.

Less surprising is the sheer pop brilliance to be found on Saint Etienne’s 2012 album, ‘Words And Music’. They always know what to do and they do it well. It was hard to choose a track from this consistently good album; I’ve plumped for ‘Popular’. It’s not the most original sounding song but that’s fine. It’s bittersweet but uplifting, nostalgic and evocative, and makes you want to dance round the living room with a faraway look in your eyes. Never mind if it’s ten o’clock on a Sunday morning and you’re wearing those mangy slippers and a baggy old jumper that really should have been in the wash a week ago. For those three and a half minutes you’re in a slinky gold number shimmying and shimmering under a glitterball. My motto is: if a song makes me feel good it’s done its job. And this makes me feel good!

But I’m also a complete sucker for a deep, rough-edged male vocal! Someone I’ve been into for many years now is American singer/songwriter Joseph Arthur. In spite of being incredibly prolific and collaborating with several people of note, he’s remained fairly underground which I think is due to his truly artistic nature and dedication to doing things his way. It would be too easy to categorise him as merely singer/songwriter, or as folk, or as rock - or as folk-rock? Oh, I HATE all those labels! I’ve been to so many of his gigs I’ve lost count, but every one has been a completely different experience and never without a surprise or two. Anyway, this year he released a double album, ‘Redemption City’. I don’t mind admitting, in spite of an inherent loyalty to him, that it’s not all my cup of tea. However, I’ve picked out ‘Mother Of Exiles’ as a great example of Joe’s occasional penchant for a good old-fashioned mad guitar freak-out…and my own penchant for those deep, rough-edged vocals. Mmm.

Finally, it’s over ten years old now so this choice can’t qualify for a track of THE year, but it’s a track of MY year, so I’m dropping it in even if it IS cheating… Of course, it has to be Suede. There’s so much to choose from but, in keeping with that guilty pleasure vibe, I’ve gone for ‘Asbestos’ from the album ‘Head Music’ (1999). Whilst commercially successful, ‘Head Music’ received a fair amount of criticism - mostly attributed to Brett Anderson’s addiction to crack and heroin at the time. Coming at it retrospectively I think it’s a brilliant album and I can’t fault his creativity, whatever state his head was in. ‘Asbestos’ stand outs to me most for its striking atmosphere – there’s something dark and forbidden about it - slightly sleazy, perhaps.

“Suburban girls and they’re making noise and they’re making eyes at suburban boys…” sings the beautifully androgynous Brett, whom I can picture dancing provocatively to this wearing a pretty satin blouse, all lines of gender blurred. And funnily enough, Rylan has just come back to mind. I’ll leave you with that thought.

Great choices C and a big thanks for all your comments in 2012.

Lana Del Ray - Sultry
St Etienne - Pop Perfection!
Joseph Arthur - Someone I've been meaning to listen to, but haven't! This is really good!
Suede - this takes me back!

Thanks once again for taking the time to write an excellent post. I love that description of Lana Del Rey, 'classy but slightly trashy at the same time'. It's good to have St Etienne back to their standard best. I had never heard of Joseph Arthur before and this is an excellent track...thanks. I haven't heard Asbestos in ages, such a good track, even if Brett reminds you of bleedin' Rylan!!

Couldn't move for LDR on the radio at the beginning of the year and it's good to hear her again now that the hype has subsided somewhat. It'll be interesting to see what she does next. I like St Etienne, but I only own a 'Best of', I should remedy that. (You're right you know, I really did feel like I was in a slinky gold number...) I've noted your praise of Joseph Arthur in the past and would like to investigate further - could you recommend a good album to start with?
The bonus Suede track is excellent. My favourite album (controversially among my friends) is 'Coming Up', 'Trash' being, in my opinion, one of the great glam rock singles.

Many thanks for posting this, lovely Tune Doctor people, I was happy and honoured to contribute something! Glad you like the choices (even if you're not quite so sure about Rylan ;-)bless 'im )

The Swede - maybe an interesting place to start with JA is the album 'Redemption's Son', from his early days when Peter Gabriel signed him to Real World. I think it gives a good all round taster of what he was, and still is, about really, and then if you investigate any other stuff you may recognise those different strands from there.

Happy Christmas everyone and may good things happen in 2013!

Lana - trashy but in a good way??
St Etienne - touchy me, squeeze me...I can feel myself dancing
JA - not too familiar but this is good and I am still dancing

Suede - excellent track...the pace has slowed but I am still on that dance floor