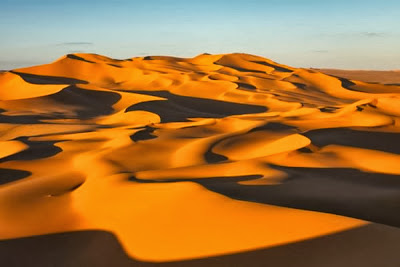 ...she's gone and left you for that Tuareg bloke with the bigger oasis. With the incessant sun, a hanky for a hat, the desert wind in your face and mouthful of sand...it looks like you have a case of the Desert Blues.

The Desert Blues is without doubt my favourite of all the African musical genres, from the Tuareg rebel music of Tinariwen and Terakaft to the 'Ambassador of the African Blues', Ali Farka Toure. With it's laid back hypnotic rhythms, hand claps, intricate guitar playing (of which you'll be hard pushed to hear any better) and the ululations of the female backing singers, it never fails to capture my imagination. (Sometimes, if it's recorded outside you may even hear the sound of crickets joining in). It's pure atmosphere, evoking feelings of distant barren landscapes, in which you can almost feel/see the heat shimmering over the dunes. Hang on, who's that coming over that ridge over there? Why it's Omar Sharif, oh no, not another mirage.

The Hendrix of the dunes, the Santana of the sand whatever tag Northern Mali's Tinariwen are given, these guys are the without doubt the undisputed desert heavyweights. The first Desert Blues group to enjoy commercial success and along with Ali Farka Toure the first band that really got me into the genre.

This cat can play! One of my favourite tracks off his third album, as it showcases his skills. Another musician from the musically rich Mali.

Samba Toure is my new Malian Blues hero. The brilliant 'Ago Djamba' is taken from his third album, Albala, it's fairly sombre stuff as it recalls Mali's recent turmoil. Essential listening.

You can't argue with Robert Plant, he's been championing the Desert Blues for as long as I know. This track is simply sensational, it's taken from the Festival Du Desert compilation, a yearly music festival held in the outskirts of Timbuktu. Atmospheric

Similar to fellow Malian's Tinariwen, probably because they have two original members of that band but their sound is a lot more vibrant. 'Awa Adounia', is the stand out track of last years Kel Tamasheq.

Justin Adams has collaborated with many African Blues artists also producing albums for Tinariwen and Robert Plant. An accomplished British guitarist, he joined up with Gambian Griot player, Juldeh Camara on 2009's, Tell No Lies album. 'Fulani Coochie Man', unmistakeably the blues, with a Gambian twist.

What can you say about the late great Ali Farka Toure, he's the desert don. Martin Scorsese is quoted as saying that Toure's musical tradition constitutes the "DNA of the Blues". The posthumously released Savane is a fantastic album with a plethora of tracks to choose from but I feel 'Ledi Coumbe' is African Blues magic.

Another Malian Desert Blues Band but with a predominately female line up. The women will normally play more traditional instruments, hand claps and sing 'call and response' type songs to the men's electric guitars. What strikes me with them is that some tracks on the Abacabok album cut into vocal jams that sound like they have and will go on for ages. It's very trancy and if you add a beat to it, you could easily thorw a few shapes to it on the dancefloor on a Saturday night.

This is taken from the Tuareg band's latest album, Chatma. A lot more percussive and 'rockier' than their Malian counterparts but here you find them perhaps more reflective. An atmospheric track that does sound like the desert wind.

Definitely something in the water in Mali, a fantastic track that sounds like it's straight out of the Mississippi Delta. I love this track, which I heard on a random sampler, it's the simple guitar with the harmonica accompaniment. Just one of those gems you probably wouldn't normally come across.

The first time I heard Amadou & Mariam was on the Manu Chao produced Dimanche a Bamako, it got my attention immediately and as a result they have become one of my favourite African artists. The beautiful 'Mouna' is taken from the "the blind couple from Mali's" first international release, Sou Ni Tile.

Hailing from Niger, Bombino's main influences came from watching VHS tapes of Hendrix and Mark Knophler! This track is taken from his second album Agadez, with some mesmerising guitar work you won't care that it's 9 minutes long, you won't want it to end.

A couple of new names to me here that I must investigate further, but I'm glad you made room for two of my favourites, Samba Toure & Bombino. I had tickets to see the latter last year, but missed out due to my brief spell in hospital.

A thoroughly enjoyable playlist, thanks for putting it together.

Be careful with what you wish for! A couple of extra sprays of sandalwood and you might never know.

Thanks Mr Swede, needless to say it was a pleasure. Terakaft are playing live in November in a fairly small venue, I'm tempted. I found Bombino's new album a little hard to get into for some reason. I love the Black Keys but I'm not sure if the production fits, what do I know. As for Samba Toure, probably one of my albums of the year.